Thought I’d write a quick article about living through the corona virus Cabopino lock down. As I write the dreadful effects of this pandemic are far from over. But I hope we have gotten through the worse of it here in Spain. 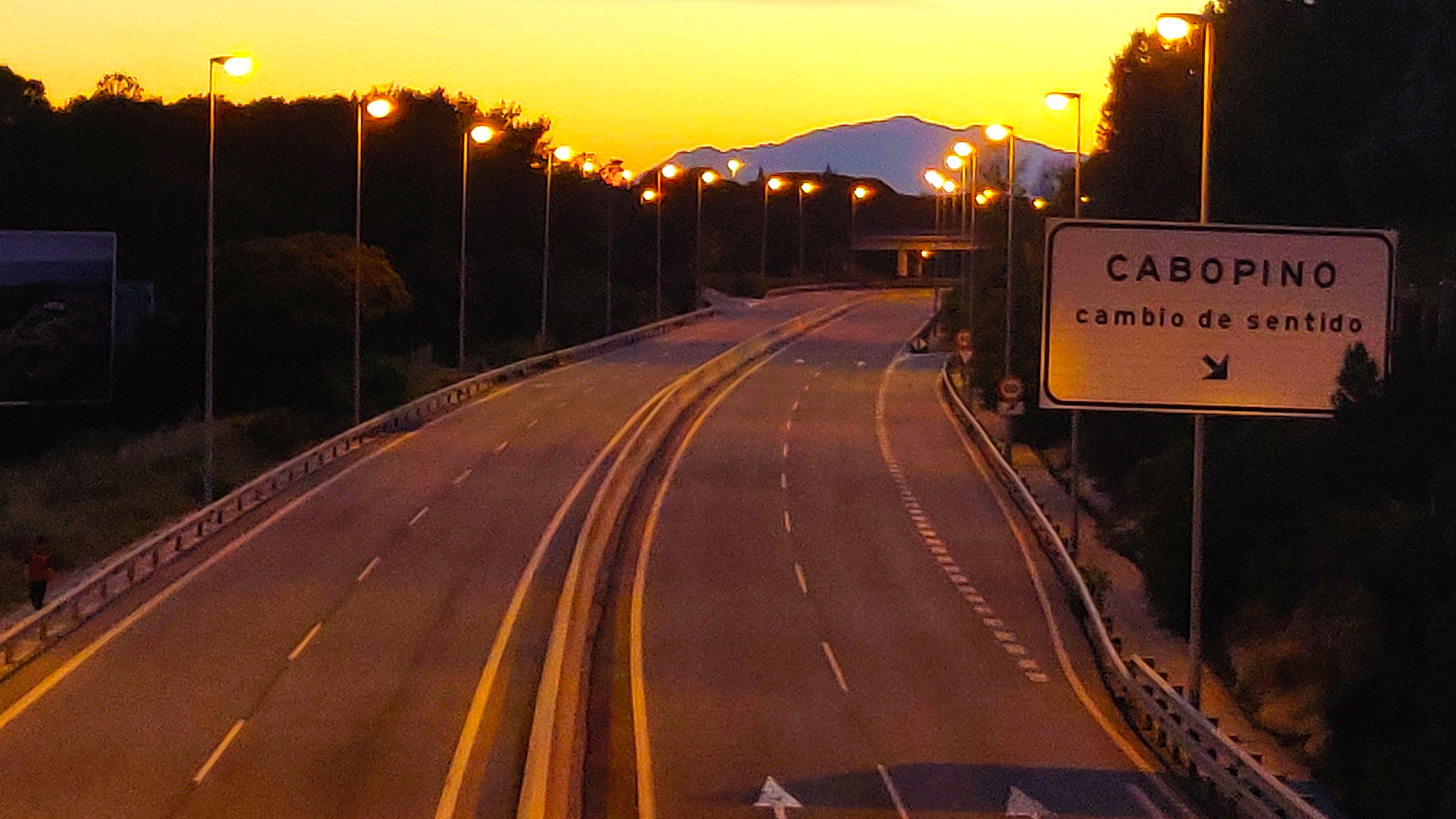 On the 6th – 8th March I attended the Andalucian Swimming Championships in Cadiz. My daughter was swimming for Mijas. I had wondered if it would go ahead as cases and deaths were starting to climb. Although these were predominantly in the Madrid area. The weather was hot and as always inside the pool it was even hotter!

At events like this you can see how a virus like this can rapidly spread. This is probably especially true in a very tactile country like Spain. Possibly one of the reasons it hit Spain and Italy so badly. At the event there were thousands of people packed into the pool. No social distancing and parents and competitors alike all greeting each other. In the traditional warm Spanish manner with lots of hugs and kisses.

As things progressed here in Spain in the coming weeks I looked on in horror at the UK. Shocked that Crufts and the Cheltenham Gold Cup proceeded.

Start of the Spanish lock down

One week later on Saturday 14th March rumors started circulating of a national lock down. My understanding was that it would likely start on Monday 16th March. On the 14th I went shopping. It was not quite full on lock down panic buying but the shops were busy. When I went, late on the Saturday afternoon, the fresh meat shelves were empty. This is about the only problem I have experienced with shopping here in Spain during the lock down so far.

I filled the car with fuel on my way home and payment was only possible via the ‘letterbox’ opening at the night till.

That evening I enjoyed a walk along the beautiful boardwalks on Cabopino beach. I did not meet many people, but those I did pass made a point of passing as far away as possible which was fine. The board walk is about 3 m wide.

Three small but significant changes during the day. Busy supermarkets, paying through the petrol station night box and distancing while walking. It bought it home to me the seriousness of the upcoming weeks.

I walked back along the fine sandy beaches. The weather was beautiful, the sea was calm and the sun was going down as the waves lapped at the beach. I walked into the marina, video chatting with a friend while showing her the beauty of the beach and the marina. The restaurants were still open. Albert’s, La Despensa and Jorge’s all had plenty of happy customers inside.

Everything looked perfect in paradise. I wondered how can a tiny invisible virus be screwing this all up.

A last pre lock down drink in Brian’s bar

I walked through the centre of Cabopino past Javier’s to Brian’s Bar. The terrace was quite busy and inside I met the two guests who were renting my apartment.

We sat inside at a socially sensible distance and enjoyed a few drinks. Discussing the likely lock down with Brian and Gill. Telling them my plans for tomorrow before the lock down. I planned to enjoy a mountain drive then a motorcycle ride past the white washed villages (without stopping!). It was not to be – Spanish TV which was on in the background announced the immediate lock down starting right now!

I finished my drink and walked home. After the experiences during the day and the announcement it felt a little scary.

I woke to a different country. Cabopino lock down was in full flow.  The traffic levels were down significantly. This said the N340 as the main coastal road was by no means empty. There was no one on the streets and the marina wall was empty of fishermen.

The lock down rules have been very well enforced. Fines for breaking the lock down rules start at €600 with a €1500 euro top up if you are cheeky to the police! There is a strong police presence. The Army have also been present in most town including Marbella. Road blocks were common place to ensure people were only travelling where necessary.

Thereafter, for me, followed 48 days of full lock down. The Spanish lock down was the second strictest globally after only China as far as I know. We can only go out for essential trips. To visit a supermarket, pharmacy, doctor or hospital. Hairdressers made it onto the list of places deemed vital, but only for one day!

I’m lucky in the fact I have a large terrace. So I could exercise on my terrace and get plenty of light and fresh air. It did not help when our usually ever present sunshine went on lock down at the same time for the first few weeks!

As airports and borders started to close my guests managed to get an early flight back to the UK. By the time we looked into it my daughters in the UK could not get suitable flights back to Spain.

Shopping in Spain during the Cabopino lock down

My first outing to the supermarket was an intimidating affair. I chose to wear a motorcycle crash helmet and gloves in Mercadona. Eyeing everyone with suspicion. As they were no doubt eyeing me. I arrived and got in fine. As I left people were queuing to get in. Limited numbers of shopper numbers inside to avoid queues and crowding. I got everything I needed. I had to choose a few alternative brands or flavours on three items but this was no problems. In fact I discovered some nice new Spanish cheeses!

I signed up for some useful free online learning courses. Thanks Skillshare! Entertaining myself with video conference ‘nights out’ with family and friends. Plus reading books, youtube videos, Amazon Prime films, loads of hiking on the terrace, social media and news.

My next outing was a few weeks later and it was shopping again. My only legal way of leaving home. This time in Lidl you had to wear disposable gloves and sanitize your hands at the entrance. I filled the trolley to the brim and unloaded everything onto the belt to pay. Then realised I’d left my wallet at home! I can’t remember a time when I’ve not carried a wallet for about 3 weeks.

Two weeks later it was a trip to the Pharmacy to buy facemasks at the government imposed maximum price of €0.96. A week later shopping again. Mercadona had stocks of everything I needed and again shoppers sanitized on entry!. Most shoppers were wearing masks although they were not mandatory. No dramas.

After over 40 days on Monday 28th April parents could take children under 14 out for an hour. Within certain conditions. For example – taking them out only once per day, for a less than one hour within 1 km of their homes.

Times like this you miss your old dog and young kids!

I can go for a walk in Cabopino

Then last Saturday 2nd May, 48 days after the lock down began, adults could to go out for a walk or exercise. Yahoooooo!

Again sensible rules applied to try and avoid crowds undoing all the good work done. Adults could go out from 7-10 am and 8-11 pm. Parents and children, and the elderly, had other time slots.

I could walk within 1 km of home, or carry out exercise like cycling within the Marbella municipality. It could be a lot worse eh!

Leaving the urbanization I felt such freedom and emotion. Las Mimosas Golf de Cabopino is an epic place but 48 days in indoors isolation is a tad too much, even for me.

It felt superb to take a walk along the beach and through the port.

Although it was sad to see Cabopino port’s restaurants and bars all closed at the 9 pm Saturday peak time.

As I write it’s now day 3 of my newfound freedom and I’ve loved walking on the beach, round the golf course and in the hills. Along with most, post lock down, you appreciate what you have in life so much more.

The current phased plan to open the country will provide a safe move to the new normality soon. With bars and restaurants potentially opening as soon as next week.

When can we travel to Marbella after Corona?

So what next. No surprise my rental apartment bookings have disintegrated. Many guests have still tried to get here. Stating they would prefer a lock down on my huge sunny Cabopino terraces than back home.

I’ve also missed seeing many regular guests during this period.

But to use the British classic song – “We’ll meet again….”. Modified to “I know where and hopefully soon!”. Does not quite rhyme as well as the original!

All my bookings from March through to currently August have gone. No one’s fault.

It is very unclear what will happen to the vital Spanish tourist industry this year at the moment. There’s no doubt Spain will want to open as soon as possible. Tourism is vital to the country’s economy.

The government has so far made strong moves to protect Spanish health. Much stronger than those taken in other countries. As a result it’s possible the Corona situation in Spain will be better than that in other countries. Where there is a significant difference in levels of infection I expect the corresponding borders will not open.

The Cabopino lock down has been quite tough but as stated above I’m lucky. Living here in beautiful Cabopino! My large terrace has enabled me to walk many miles each day (200+ laps a day!), and I agree with the Government’s tough approach.

Things are looking much better here in Marbella.  The Marbella weather is getting very summery!  Warm evenings are back.  This said there is a still a long way to go with defeating Corona.

I hope everyone is staying safe. I’m looking forward to greeting my regular guests and those new to this apartment as soon a possible.  If you’d like to see availability and pricing take a look at my Cabopino apartment availability page.   It would be great to see you out here in the sunshine soon.